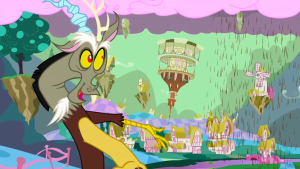 Shortly after the street release of MLP CCG third set (The Crystal Games), Enterplay announced the title and release dates for the fourth set. Absolute Discord promised players more Discord than we could handle with new cards and a brand new game mechanic.

Over a fortnight leading up the American pre-release dates, Enterplay developers teased card art and mechanics details. The spoilers promised us some fan favourites as friends (Sunset Shimmer and Discord), some new epic villains, wacky events and a troublemaker that was a nod to the IDW MLP comics. 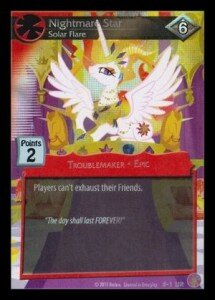 The spirit of chaos was certainly with the event when the day before hand, one Brisbane store found out that Banter had not shipped the pre-release kit to them. Fastbreak held their pre-release event on the advertised date (May 9 2015) and Guf held their event the week after when the kit finally arrived (May 15 2015). 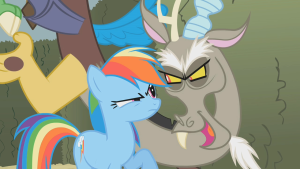 Thanks a lot Discord

The Absolute Discord pre-release event was a sealed booster draft. Every player got 6 booster packs and had to build a 25-card deck and a 5-card problem deck from the 6 booster packs. There were two manes on offer and they were randomly allocated. Players were allocated Discord, Bending the Rules or Fluttershy, Reformer. I was allocated the pink Discord mane. My pre-release luck held out and I pulled an ultra-rare Sunset Shimmer from my very first booster.

The six booster draft went better than expected as Absolute Discord has a great range of entry cards and problem cards. After the first game loss, a second game bye and two wins I came fourth on the table. The tournament organizer Lincoln placed first so the grand prizes were distrusted by D12 dice roll. Our 2nd placed player won the Absolute Discord play mat and 3rd and 7th players won the promo Lord Tirek cards. Everyone walked out with extra boosters, the promo card Rainbow Dash: Rainbow Crash, badges, a balloon and a post card. I got an extra surprise by pulling an ultra-rare Iron Will friend from one of my booster prizes.

Firstly, the Absolute Discord set is very, very cool. The new set introduced over 150 new cards including a stack of much needed entry. Absolute Discord also introduced the new mechanic: Chaotic. Chaotic cards have one effect when flipped and another effect when brought into play. Chaotic cards can change the outcome of a face off, generate Action Tokens, put cards into play or even flip manes over.

The sealed booster event worked better with the Absolute Discord cards. As there were more entry cards and more problem cards, it was easy to construct a playable deck with the cards from the six booster packs. One of the biggest problems with the Crystal Game pre-release event is that some players did not draw entry or solvable problems and were at a distinct disadvantage. The Absolute Discord set did not suffer from this problem.

What could be improved:

One of the things that changed between pre-release events was the price. The Crystal Games event was $25 per person and the pack included sealed boosters and prize support for 20 players. In the Absolute Discord event, it was $35 and the pre-release pack only supported 12 players. This was disappointing because there was a waiting list for the pre-release event and some players missed out.

Overall, the Absolute Discord event was fun to attend and ran very well.  Everyone was impressed with the new set and the Chaos mechanic and the new cards add some more flavor to the MLP CCG. It would be nice to see Enterplay take on some of the player feedback and improve the pre-release event for the next set.