Home
/
Board Games
/
Games From Around The World
Tweet Pin It

In 2016 I was fortunate enough to be able to spend a bit over 12 months exploring the UK and Europe, and I came across a plethora of evidence for one of mankind’s oldest pass times. No, I’m not talking about that pass time, you dirty thing. I’m talking about board games. I found ancient games now passed from the world, modern games suited to a particular context and even one of the worlds most popular games rendered in fantastic style.

In the National Museum of Scotland in Edinburgh we came across pieces from what is thought to be one of the few remaining complete medieval chess sets. Found on the Isle of Lewis of northwest Scotland, these pieces were probably made in the 12 century and are carved from walrus ivory. Scholars argue whether they originated in England, or came from Norse territories such as Iceland. Both are said to have been the first regions to refer to the diagonally moving piece as the bishop, which is a feature of this set. Notice the detail of the Berserker – the Rook – biting his shield to control his fury.

The Battle of Bannockburn

Also in Scotland, in the town of Stirling this time, we came across a fairly awesome gamification of history. We were visiting the Battle of Bannockburn Visitors Centre, a building dedicated to memorialising the victory of Robert the Bruce over the naughty English in 1314, remarkable for many reasons, the least of which was it was one of the only historically correct details in the film Braveheart. In an attempt to seize Stirling castle, which essentially acted as the gateway to Scotland, the future King of Scotland negotiated with the castles commander. If the English King was not able to relieve the garrison within a year, the castle would be given over to the Scottish cause. With very little of the promised year left, Edward II raced north, right into a well laid trap. Over two days, Robert the Bruce gave the English a bloody masterclass in the tactical use of terrain, as clever placement of stake and pit traps along the obvious marching route forced them to negotiate rolling heath and the soggy ground surrounding the various streams of the Bannock burn (burn meaning creek in Scottish). The English soldiers that managed to slog through all this were met by a wall of Scottish pikes, and were crushed. 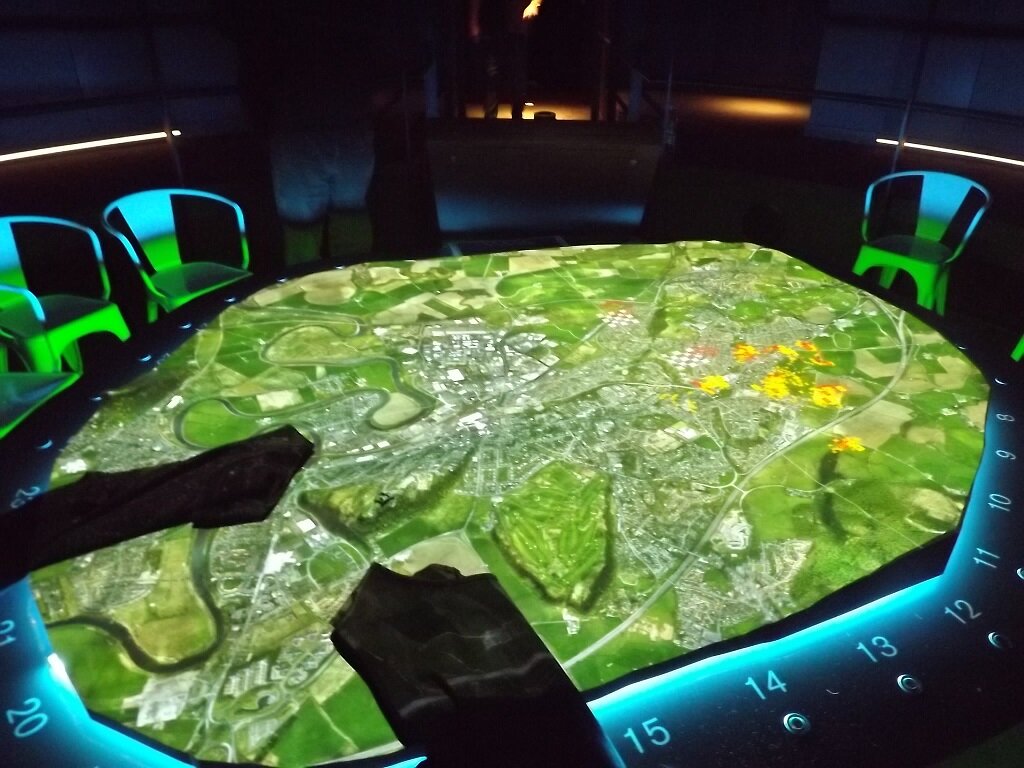 The battlefield showing the modern city of Stirling.

In the museum we not only got to play around with various pieces of equipment from the era, but we were also treated to an audio visual display described by an American marine who had extensively researched the battle. By cleverly projecting a video of the battlefield onto a white topographically correct surface, they were able to clearly explain the course of the battle. Not only were we shown how the real thing went down, but we also were given roles in order to replay the battle. Cast as the English King, I was able to push forward and roll over the top of the Scots, mostly due to the fact that the opponents had decided to use the selection of traps to shield the flank rather than the forward approach, which gave me free rein to engage on flat ground and bring my superior numbers to bear. Essentially the opposite of the Bruce’s plan, neatly highlighting his genius.

Sometime later we visited Oxford, and it was no surprise that such a centre of learning had a number of museums and historical collections, one of which has this beautiful and ornate chess board on display. According to the description it originated in Northern Italy in the early 15th century, carved from bone, wood and horn. Notice the detailed carving of various figures along the sides, possibly intended to reflect people in the court or the country at the time. 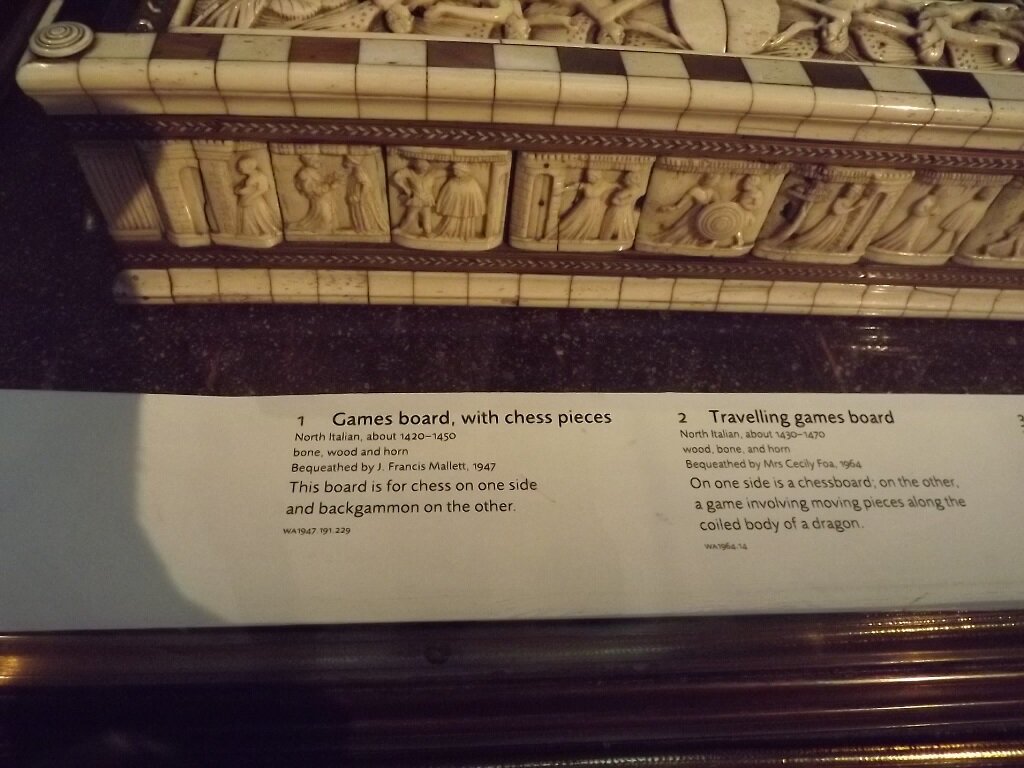 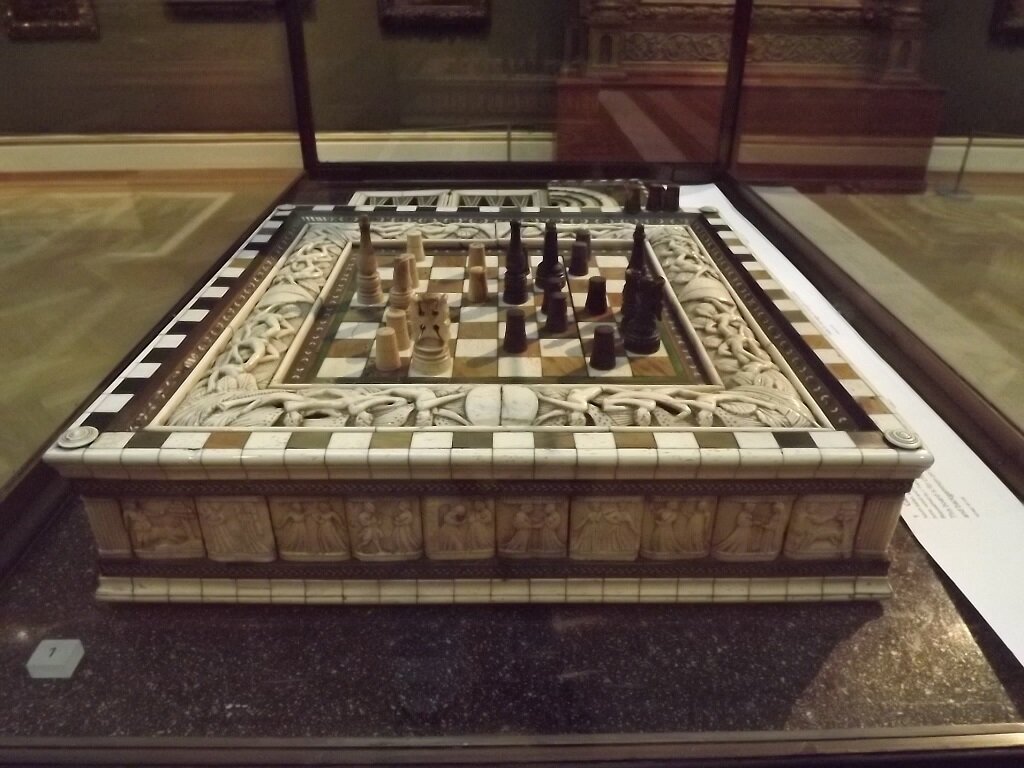 In the historic Roman town of Bath we found the historic Roman game of Tabula. Set out in a manner mildly reminiscent of Backgammon, the game employs rules somewhat like the modern snakes and ladders. Players attempt to move their 15 pieces from the start to the finish, using three dice at ta time to move up to three pieces at a time. Landing on the same square as your opponent sends their piece back to the start, but you will be blocked if they have multiply pieces in one square. Thus the obvious tactic is to keep your pieces together to protect them. The other important rules were that no player could enter the second half of the board until all tokens were in play, and no player could exit the board until all quarters had entered the last quarter. This last one made for some frustration when a counter was sent back to the start, thus freezing all other counters on the board, as seen below. 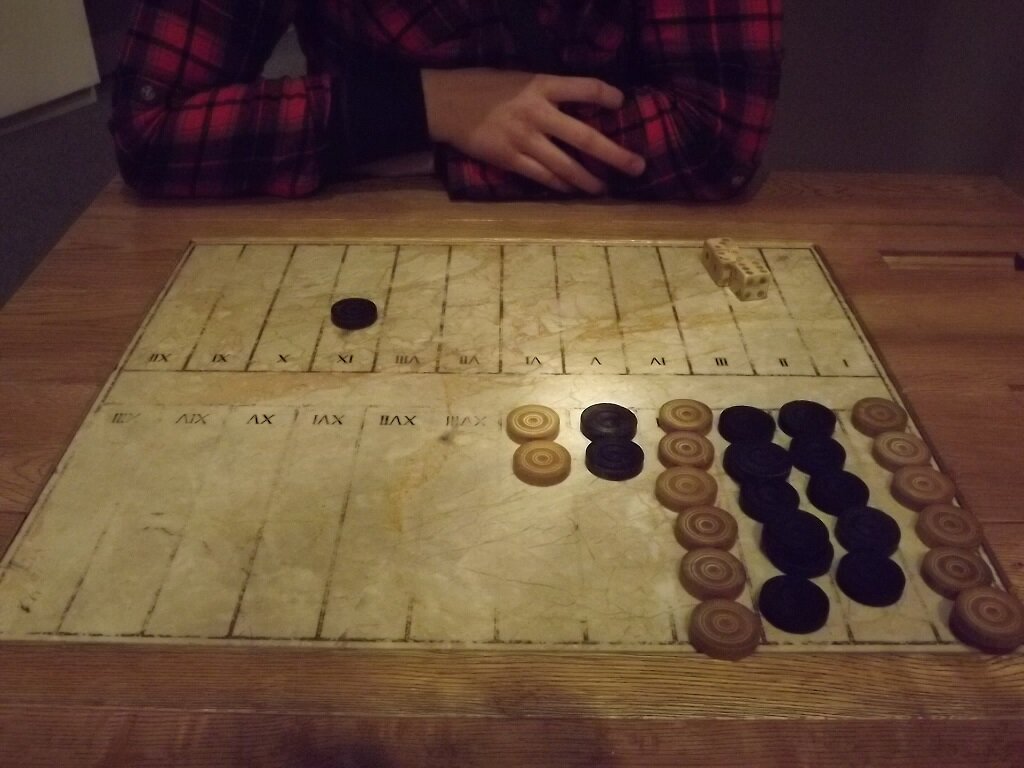 We may have also failed to read the rules properly, which in our defence were on the wall around the corner and thus out of easy sight. Turns out we failed to read that part about exiting the board, so we thought we just had to stack all of our tokens up at the end, which lead to the traffic jam you can see above, and also involved a number of turns of rolling all but the numbers we actually needed. You can see from the look on my partners face how glad she was that I insisted we play right to the end. 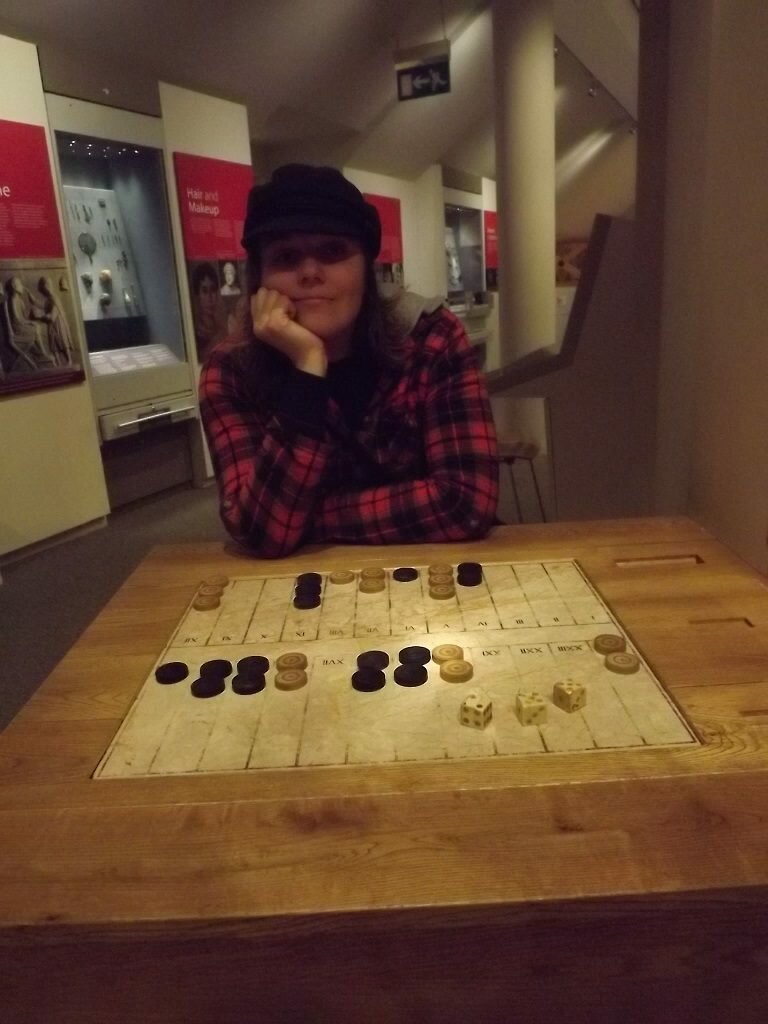 Where else but in France would you find such a wonderful thing as a museum of wine? I have to admit that my knowledge of wine come more from experience than research, so it was nice to see a little bit of information about viticulture, despite the language barrier. My favourite part was a game set up on the style of kids classic Guess Who? However, instead of people we were guessing specific varieties of grape used in making wine, and instead of facial features we were distinguishing by colour (not such a troubling detail as in the original), leaf shape, grape shape region, and whether it was a hybrid of varieties. Perhaps it could have been improved with a sample or two to help our understanding. 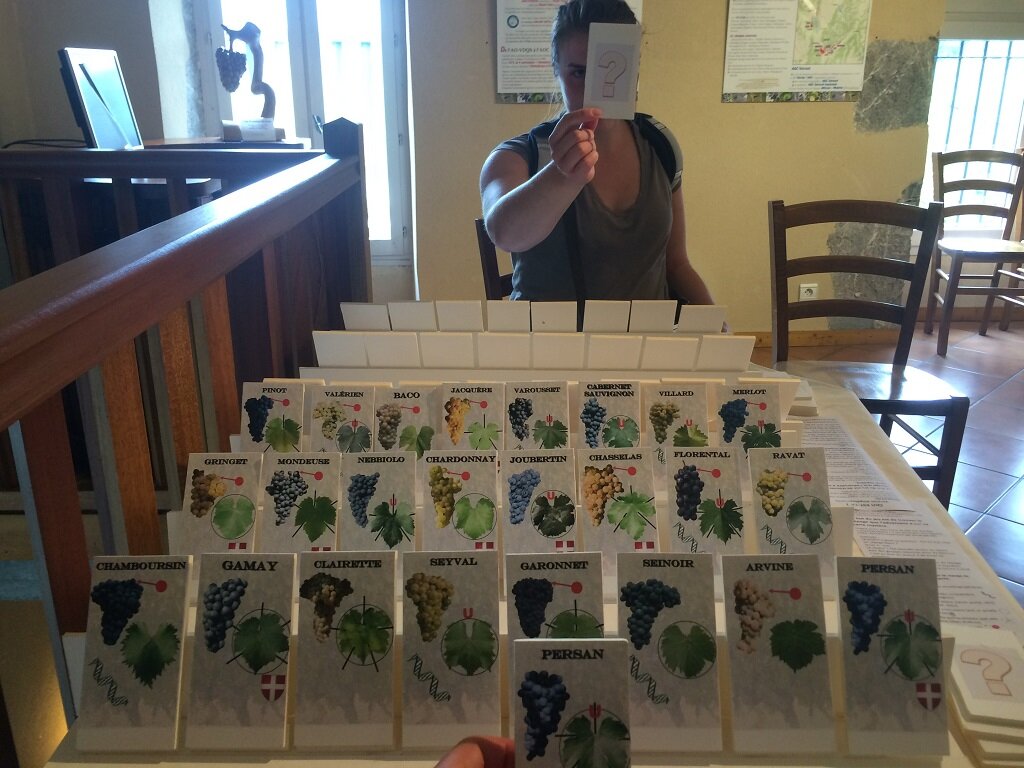 Also in France we visited the Normandy war memorial, which not only covered the historic D-Day landings but also included a comprehensive description of events leading up to, during and after World War 2. In one corner I found a display of what can only be called propagandist board games. Who knew games were so versatile? Particularly bad is the presumably American game based on the campaign that included what is considered to be the single most destructive bombing raid in human history. Perhaps unsurprisingly, this was called the ‘game of the year.’ Also displayed were a game about the invasion of Germany from all sides and a chess-like game called Wehrschach that was released in pre-war Germany. Apologies for the quality of the photos. 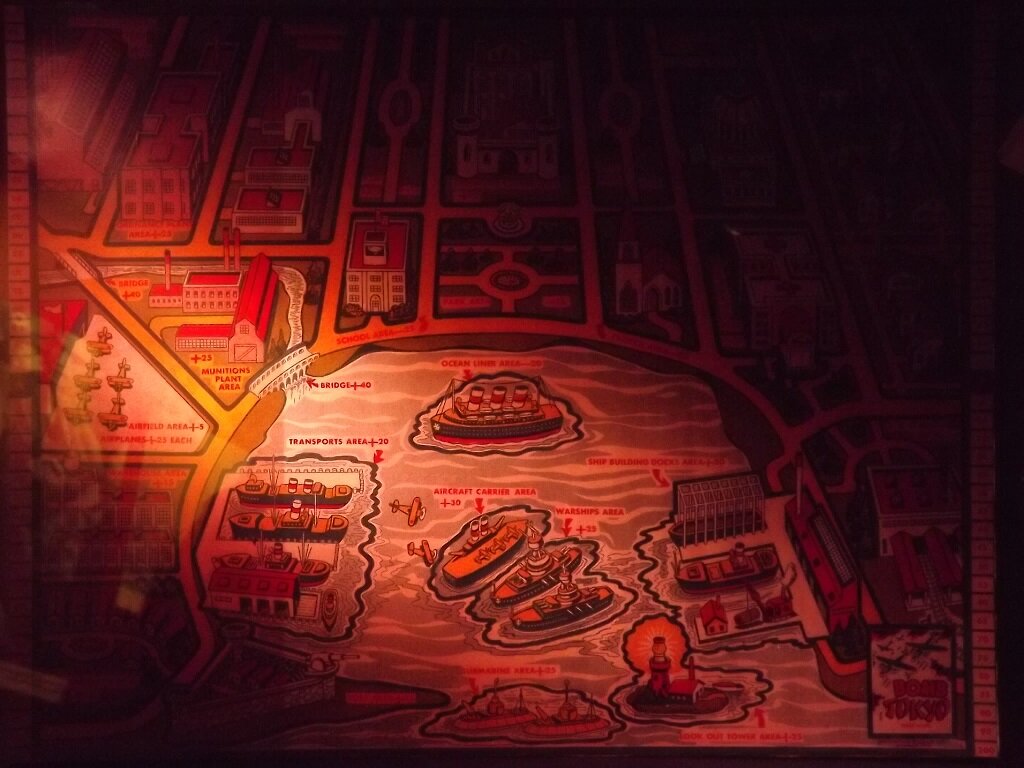 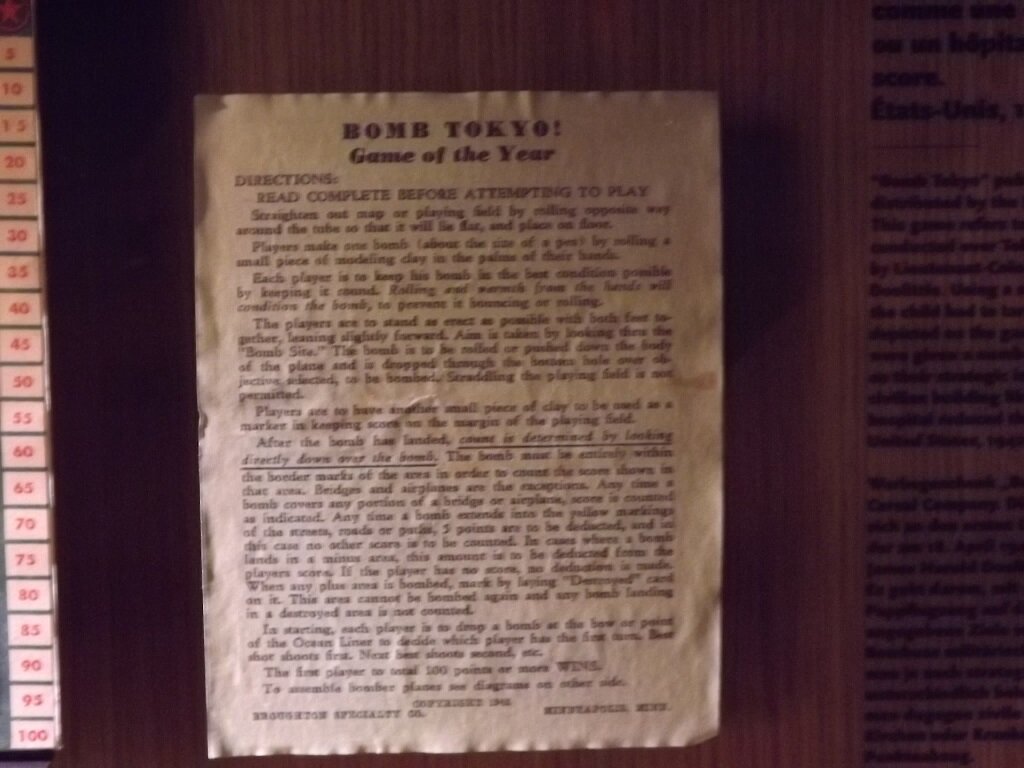 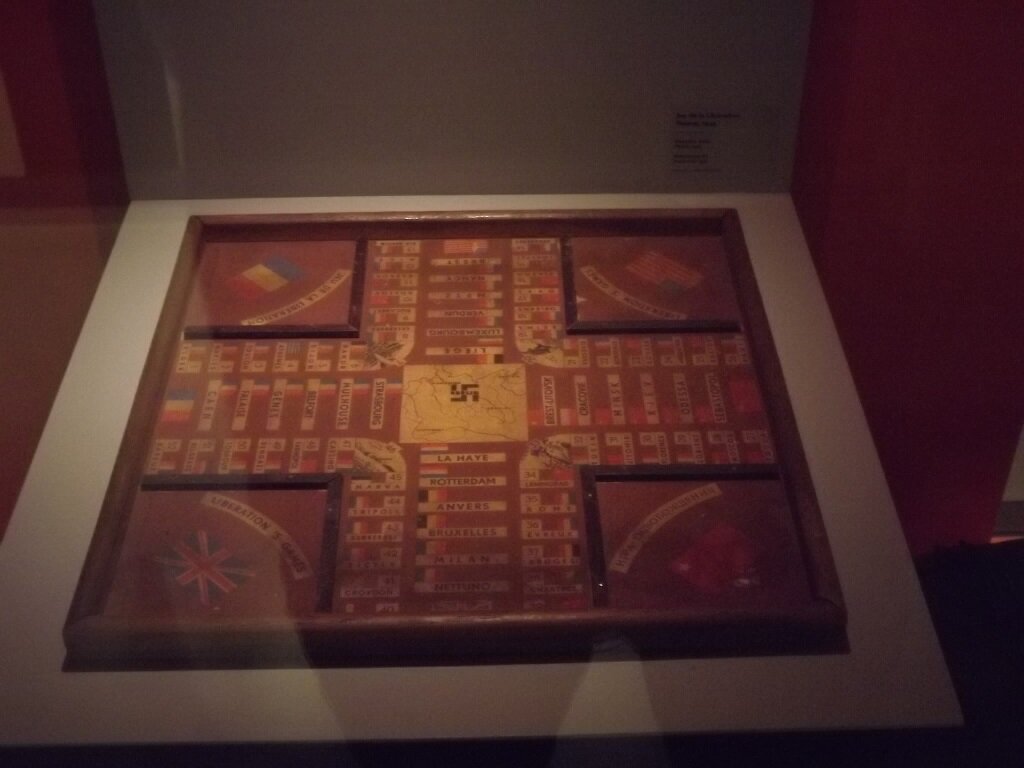 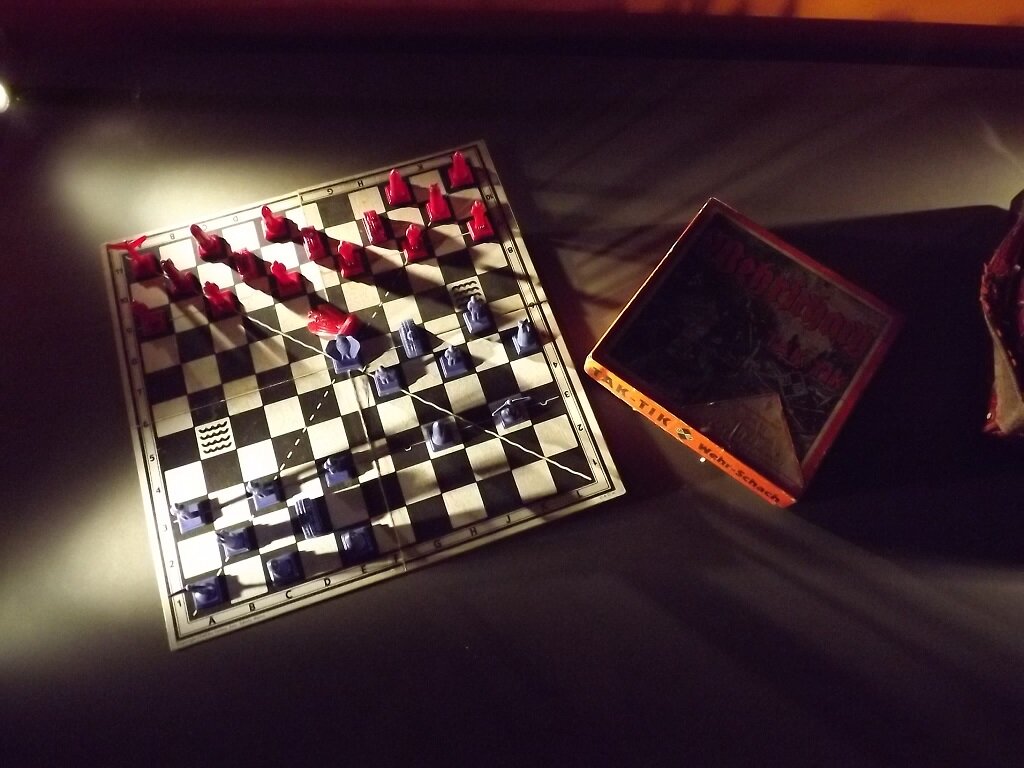 As if to prove its popularity, we once again came across some amazing chess sets, this time in a shop in the ambling streets of Venice, a city in which we got lost numerous times and were lucky to find anything in the end. The sets ranged from classic historical encounters to more modern dichotomies. I’ll save my words here in order to let the pictures tell you their stories. 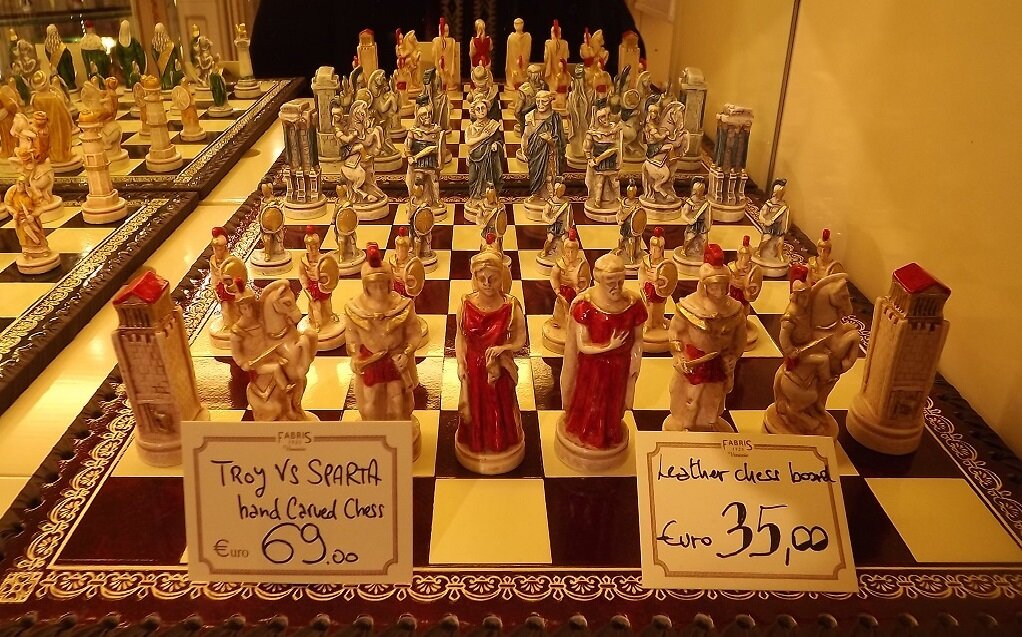 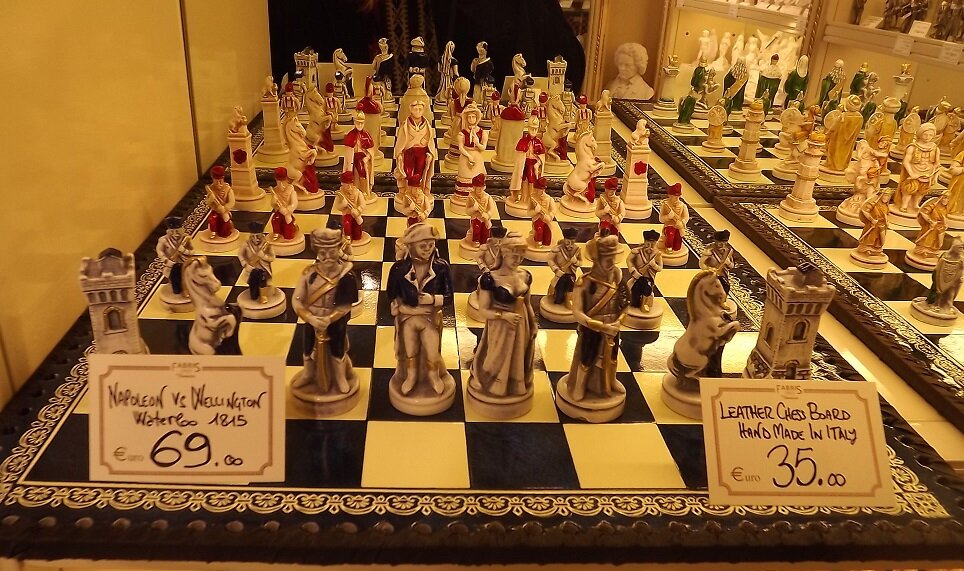 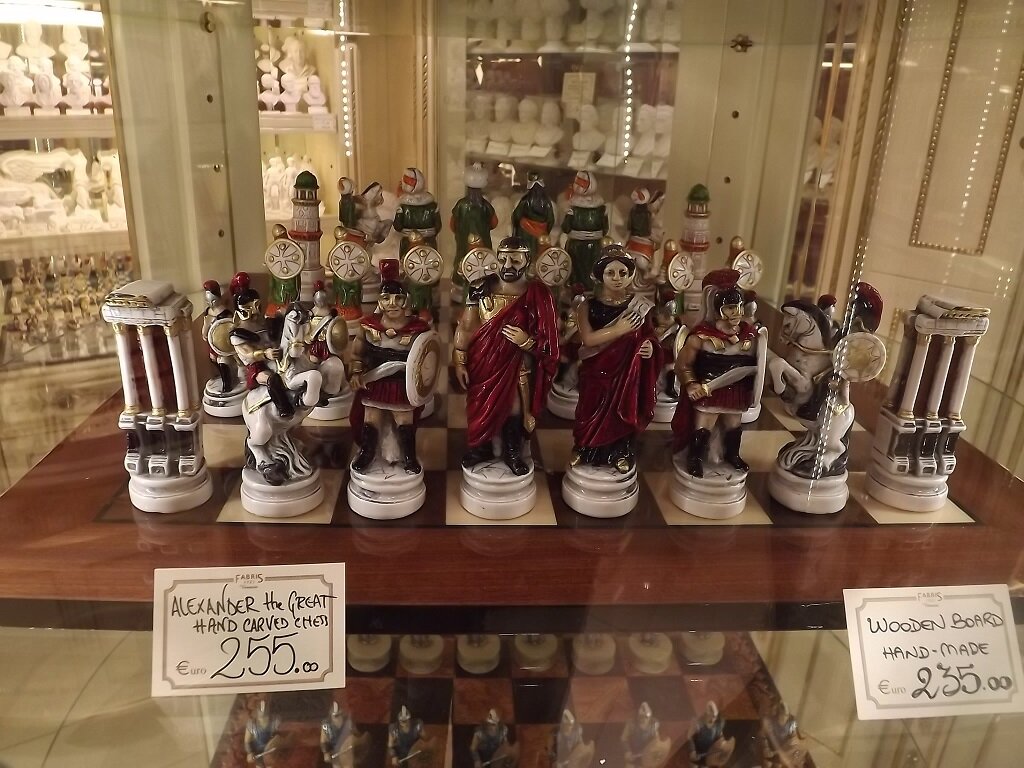 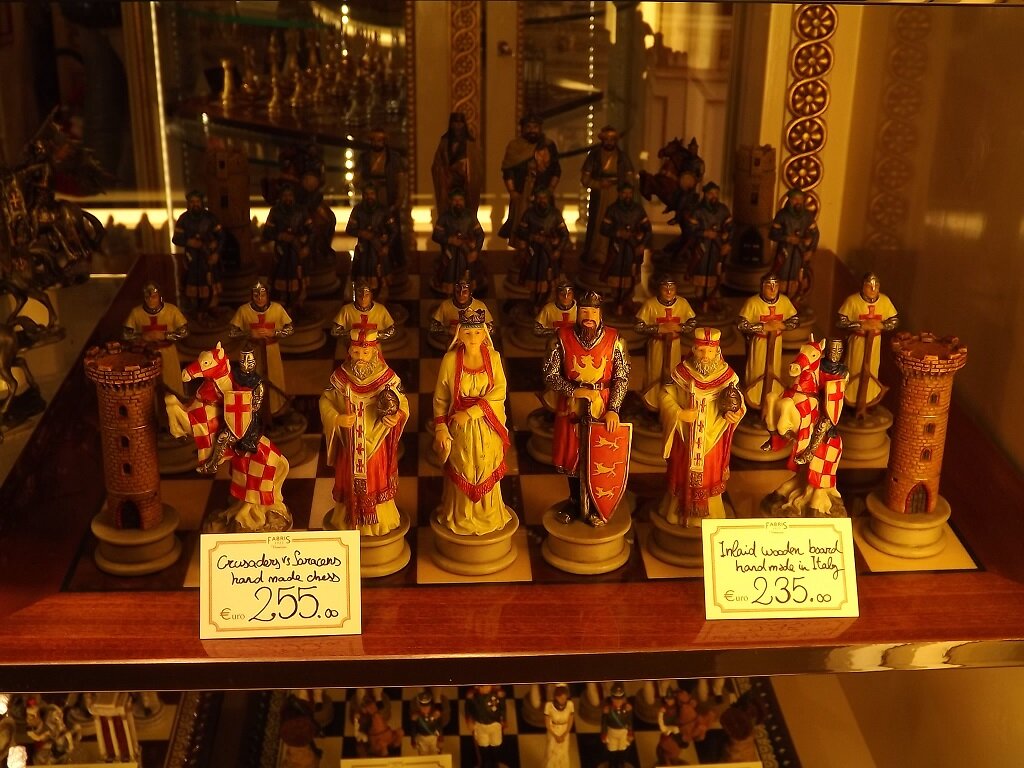 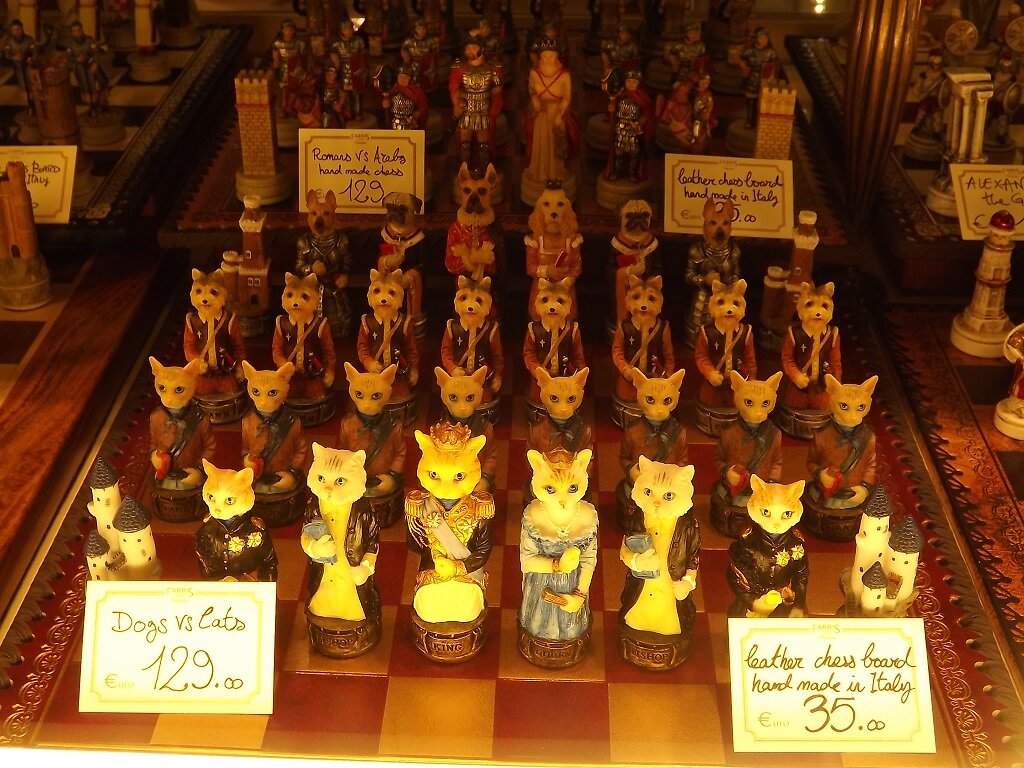 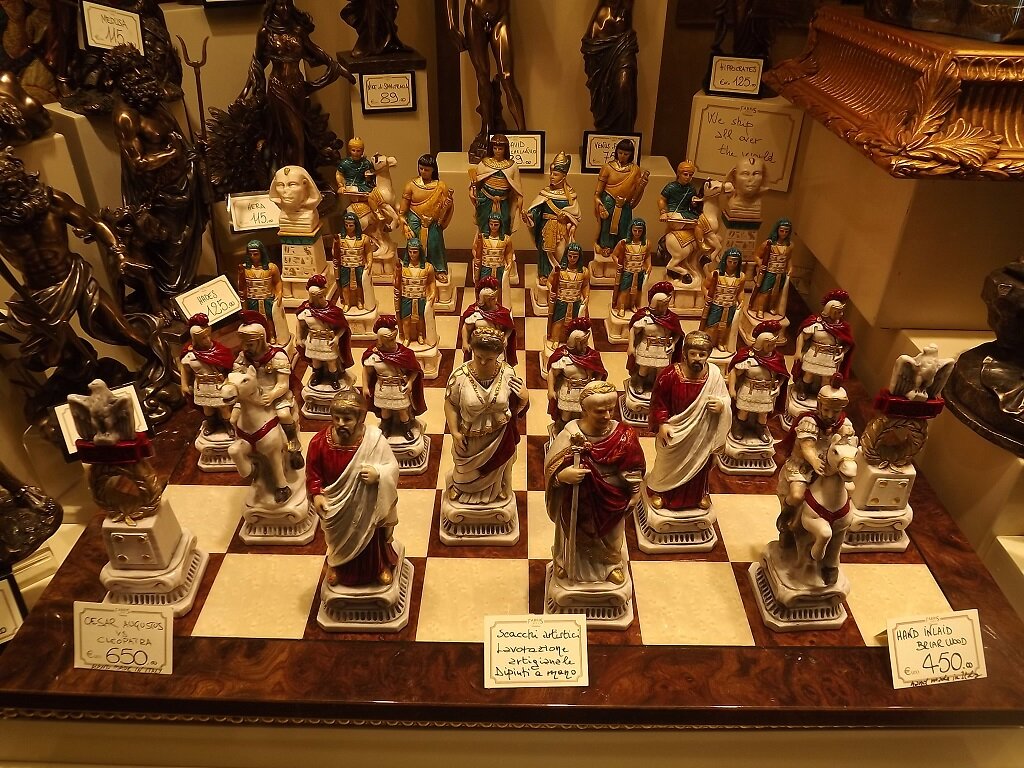 The only other game I came across on my travels was the Viking game Hnefatafl, a game similar to chess but that likely historically preceded it. I omit a full description as I may just scribble up a whole article, having bought and brought back my own copy from my travels. Until then, never stop playing. 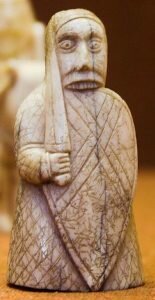 David has dipped his toes into a number of card and tabletop games, including MTG, Warhammer, Warmachine and Flames of War, though none of these at any kind of competitive level. An even greater passion than gaming is the English language, and as such he is the editor at ATGN, as well as now an occasional contributor.