So we have the release of Cardfight!! Vanguard Booster Set G-2, bringing some much needed support to a few fan favorites. The set brings support to many clans such as the field spamming power house Neo Nectar! The fleet that rules the sea, Aqua Force! The fierce thunder dragons, Narukami! The ever skillful Great Nature! The new rulers of time, Gear Chronicle,  and the leaders of the United Sanctuary, Royal Paladin. This sure doesn’t disappoint it’s players as it brings extremely useful cards for each of these clans, as well as introducing the new skill “Resist” which makes units with this skill unable to be chosen as targets by opponents’ effects. With this set the two main clans people are looking forward to the most is Narukami and Aqua Force. 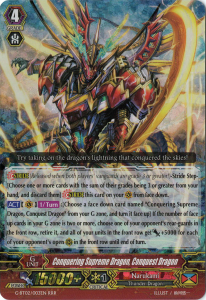 We’ll start this party off with Narukami, as they gain their new stride and boss card in this set. First off we have their new boss monster Dragonic Vanquisher. He’s quite the field controller as he has the ability that when stride is performed on top of him he allows the player to retire one of the opponent’s front row units. His generation break 2 skill is a copy of Eradicator, Gauntlet Buster Dragon’s limit break ability. In my opinion this card is okay, however when you look at all the retire skill within Narukami and the extra grade 2 support from this set he shines like a gem with this power house control deck. Next up is Conquering Supreme Dragon, Conquest Dragon, Narukami’s brand new stride unit. This card follows through with supporting the field control that Narukami likes to have over its opponents. This allows the player to flip a copy of itself up in the G-zone in order to trigger its skill, which lets it retire one of the opponents front row units, then grants it’s own front row a solid plus 5k for every open rear guard circle in the opponents front row. It’s a solid card that supports the play style of Narukami, opening a path in the opponent’s front line and striking at their core with raw power. 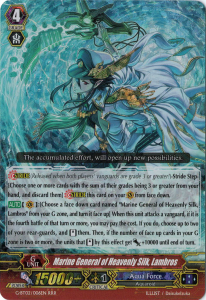 Now we arrive at Aqua Force. They truly become a force to deal with as this set jumps them up the tier list putting them among the top decks. Their new big hitter Marine General of Heavenly Silk, Lambros brings the power to the already fierce multiple attack deck. This card lets them swing for a solid 6 attacks in one turn as well as giving them a large amount of power to threaten the opponent even further. Combining this with the support of all their new units from the set as well as the recent trial deck, and they really have the power to shut most opponents down within a few turns. I don’t see this clan dropping anytime in the near future from their spot among the top decks in the game. If anything I look forward to what can come from future support.

In the long run this set truly provides great support for each of these clans, and the next set already looks to be another much wanted release. Looking forward to it and playing against these new power houses!