2016 is an exciting year for Eternal format players with the Legacy Double-Grand Prix in Prague and Columbus coinciding with the release of Eternal Masters supplementary set, and GP Chiba in late November. Of course these are in addition to the usual Star City Games Opens, regional tournaments, side events and five Bazaar of Moxen events across Europe. ATGN will be bringing you its own, special, Eternal Double-Header in mid June, with a look at Australian Eternal players, both abroad and at home, as well as a review and unboxing of Eternal Masters and the effect it will have on the Eternal playerbase at large.

Before delving into the current state of Legacy, it is important to debunk the biggest rumour surrounding the format, echoed in forums across the internet: LEGACY IS DYING!  In terms of attendance, 2012-13 season saw 4313 players across two European and two US GPs, the ’13-’14 season – 3285 players across one European and one US GP, the ’14-’15 season – 7578 players in one European, one US and one Asian GP, and the ’15-’16 season has hosted 2014 players so far in Tacoma, with the June double-header still to come. Observing these numbers alone it is quite evident that the format is growing, rather than seeing the shrinkage that naysayers across the internet seem to think is happening. Additionally, Wizards of the Coast is about to release supplementary product aimed at Eternal players, or prospective ones, which would be a financial blunder if the format was failing.

It will come as no surprise to observers of the format that Shardless BUG and Miracles still occupy the top tier slots of the Legacy metagame, both relying on their massive card advantage generators, in Counterbalance and Shardless Agent to push their opponent out of the game. These two decks have been powerful elements of the metagame since their inception and show no sign of slowing their streak just yet.

What may be surprising, however, is the appearance and results being posted by the new kid on the block, Eldrazi Aggro. Similar to the (ex) Modern deck, Eldrazi relies on leveraging their Thought-Knot Seers for card advantage while beating through with an endless horde of Eldrazi Mimics, Matter Reshapers and Reality Smashers. Playing these eldritch horrors on top of the tried and tested MUD staples, including Thorn of Amethyst, Lodestone Golem and the Brainstorm-killing Chalice of the Void forms a deck that has the ability to either hamstring an opponent, or crash straight through them. One of the most underrated, yet interesting cards in the deck is Warping Wail, which plays a dual role in that it counters the ever-present Terminus, or exiles some of the more obstinate creatures in the format, such as Mother of Runes, Delver of Secrets, Deathrite Shaman, Dark Confidant, or any number of elves.

But we’re not here to talk about the presence or strategies of the popular decks, that’s been done time and time again, and by more decorated players, no doubt. It is far more interesting to discuss a deck that is posting meagre results, or one that is on the verge of breaking out. Or, in this case, one piloted by an artisan of Legacy, that has since fallen out of favour. We’re talking about Jeff Hoogland’s entry to GP Milwaukee in 2013, with which he placed second, Burning Loam.

This deck is layered with toolboxes upon toolboxes and makes the deck playable against any opponent, even in game one. I have been playing this deck for around six months, and have made a few adjustments to bring the deck up to speed. Perish has been changed out for Toxic Deluge,  and the third Thalia has been replaced by Slaughter Games. These changes are the result of better cards being printed since 2013, the rise of Miracles, and Green decks occupying a reduced number of total decks since that time.

The most important card in the deck, and lending to the title, is Life From the Loam. By correctly using this card, you can either establish a Wasteland-lock, get a recurring attacker in Nantuko Monastery, or quickly churn through your deck using Forgotten Cave and Tranquil Thicket‘s cycling plus Loam’s Dredge mechanic, to find your silver bullet lands in Karakas or Maze of Ith,  Grove of the Burnwillows, or just find cards that interact with the graveyard, like Knight of the Reliquary or Punishing Fire. Since this functionality is so crucial to playing the deck, it’s not surprising that pilots will spend the majority of their game time loaming, dredging, and cycling.

Mox Diamond allows the deck to explode out of the gates when drawn, enabling a turn one Dark Confidant, Sylvan Library, Loam, or preferably, a Chalice of the Void at X = 1.  Any of these plays will set the player up for a more consistent game, getting extra cards or better information on their draws. At worst, Mox Diamond reduces the strain on the player in terms of coloured spells, which is a real factor when the deck wants to cast Loam, Confidant, Punishing Fire and Knight at similar timeframes. Chalice, though, is something else entirely. A chalice with one counter on it counters at least one card in most every deck in the format, notably disabling Brainstorm, Sensei’s Divining Top, Lightning Bolt, and Swords to Plowshares, even more so on the play. Occasionally Chalice will win you a game on the spot as it is nearly impossible for Delver or Storm to win without one mana spells.

Typically, a player will find themselves attacking with a Knight of the Reliquary, and with a graveyard full of fetches, cycling lands, dredged lands, and Wastelands, it is quite common to see the Knight’s power and toughness in the double digits. The Knight can also be combined with a post-damage step Maze of Ith to achieve pseudo-vigilance, or can be used to get the Bojuka Bog that was sideboarded in game two to shut down Reanimator decks at instant speed.  Another potential win condition, though far slower than beating the face, is the Grove of the Burnwillows/Punishing Fire combo. By tapping the Grove and casting Punishing Fire every turn, you apply one point of damage for three mana, which can be increased by three mana and two damage for every individual Punishing Fire you cast. A slow clock to be sure, but a win is a win. When playing against a deck that is heavy on removal or countermagic, Nantuko Monastery is one of the best options. Loaming it back every time it is destroyed is a great way to outlast those pesky removal spells, Threshold is impossibly easy to turn on with Loam, and the First Strike ability lets it duke it out with Tarmogoyfs and other big threats if you have a sneaky Punishing Fire available.

If you’re a fan of hearing “I concede” rather than dealing lethal damage, this deck also has you covered. By Loaming over a few turns to increase your hand size, it is possible to cast a Devastating Dreams that truly brings new meaning to the word ‘Devastating’. At X=5 or higher, against the majority of the field you’re likely to get a concession on the spot, if not there’s always a now colossal Knight ready to lay waste to your opponent’s life total in short order. 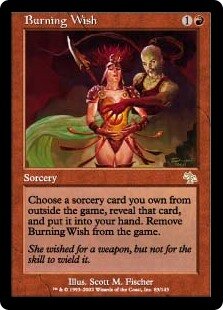 Add ten cards to your deck without the variance!

Of course, it’s impossible to go past the other titular card, the card that immediately had me hooked, the reason the deck shines in all three matches, and the only way you’re going to get to play a Demonic Tutor in legacy: Burning Wish. With careful construction, Burning Wish becomes a tool the power of which is rivalled by Deathrite Shaman and Umezawa’s Jitte. By correctly utilising Burning Wish, a Loam player can wither a wide board, kill a problematic creature, remove those pesky Rest in Peaces, disable a combo deck, or simply get the fourth Loam or third Dreams to finish their opponent off.

Unfortunately, the deck does somewhat poorly against a Miracles heavy meta and the opponent can leave a spare Counterbalance on the top of their library and not only counter the majority of Loam’s great spells, but also ensure against their first Counterbalance being destroyed. It also under-performs occasionally on pure random chance; with two black sources and only four fetch lands, it is possible to dredge through a bulk of your library without seeing one of these, rendering (most notably) Abrupt Decay useless.

Some loam players have been experimenting with the newly printed Arlinn Kord as a standalone threat, or as a buff to the deck’s Knights. While I think there may be some merit to her, I don’t think Arlinn shines in this deck as much as she should. It will always be simpler to hold off attacking for a turn with the Knight and fetch Maze of Ith to achieve vigilance, and using her as a threat by making a wolf token and flipping her is worse than most other four mana plays, including Burning Wish + Devastating Dreams or Loam.

Not much more can be said about the deck than this: it’s a sly tier two deck for the time being, but if Miracles should go the way of Treasure Cruise, it’s poised to take the top spot. For now, you can mark June 10th on your calendars for our special Legacy double header on Australian Legacy players abroad, and the EMA set drop and unboxing.

Until next time, keep brewing, keep bolting and keep brainstorming.

Starting with chess at age 6, Connor quickly grew to love a competitive challenge and is currently trying to break into the competitive side of MTG and Hearthstone. He also Roleplays and plays board games socially with friends.